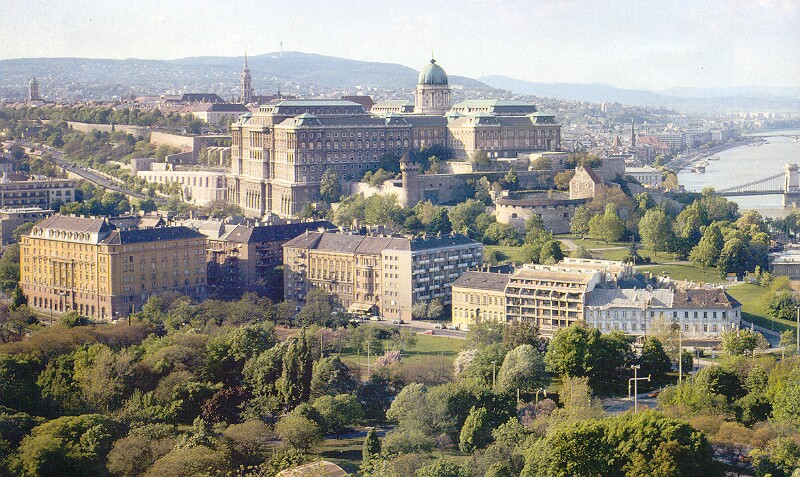 With its rich cultural heritage, the building complex of Buda Castle is set on a hilltop imbued with special natural features. Castle Hill, which has a flat but wide plateau with steep slopes, rises out of a land situated on the border of various geographical regions. At the foot of the hill, on its eastern side, is the river Danube. On the other side of the river, at the edge of the extending Hungarian Great Plain, marshy backwaters once surrounded islands of varying sizes. The width of the river was sufficient to separate cultures and countries, but at this point it was forgeable at several points. The southern ranges of the Buda hills can be seen beyond the right bank of the river. A valley separates the long western and the peaked southern side of Castle Hill from the foothills of Sváb hill, that is Gellért Hill, Nap Hill and Small Sváb Hill, at the foot of which the twisting Ördögárok stream collects the waters of the streams springing from the hill. In the north, stretched over a smaller valley, are the foothills and hillocks of the Hármashatár Hills: Rézmál, Rókus Hill and Rózsadomb. 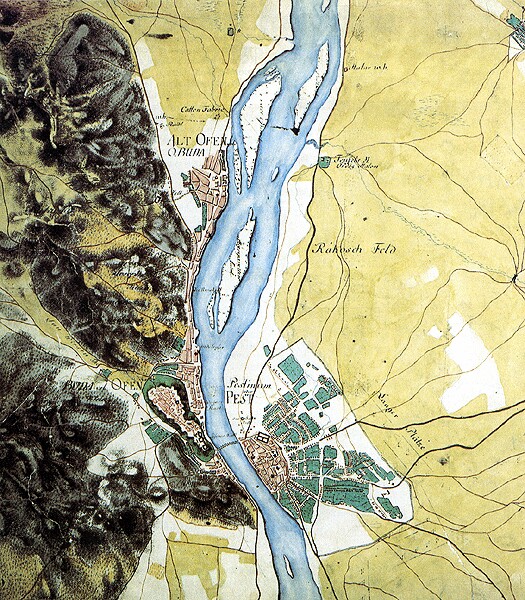 The geohistory of Castle Hill distinguishes it from the other parts of the range in many ways. Its main components are the marl layers from the bottom of the Pannonian sea, which were formed millions of years ago. Later, at the level of the early Danube valley, these layers were capped by a hard, freshwater limestone (free-stone) formed by the deep thermal waters. This special formation protected the marl lying beneath it, marl easily being erodable by water. However, it was not only gradual erosion that caused Castle Hill to rise, but also the tectonic movements observed along geological fault lines on both sides, leading to a sinking of the area surrounding it.

Today the fairly long plateau of the hill is about two kilometres, and almost 400 metres wide on the northern side and about 150 meters at the narrower, southern side. Its highest point reaches a height of 180 metres (above sea level) around Szentháromság utca, rising to an elevation of 50 to 80 metres above its surroundings. The limestone surface slopes gently from north to south, and slanting layers can be observed in similar directions in the inside of the hill, the main component of these being the marl layer. The plateau becomes narrower at the southern end of Dísz tér, where valleys were formed on both sides of the hill as a result of erosion. To the south limestone can be found again, although in contrast with the northern part, the layer is much thinner and crumbly. The width of the limestone layer covering the hill is 5-6 meters on average, but in the north it reaches 10-14 meters, and there is a varied cave system, which was formed by the waters oozing through the cracks (Castle cave). The freshwater limestone "duvet" and its main component, the rocky marl are not directly connected. At the borderline crumbled marl, pebble layers from the one-time Ördögárok stream and waterproof clay layers alternate. The oozing waters, forming caves and holes, later washed these away. The leaking water drains to the east, according to the slope of the hill, and comes to the surface in springs on the Danube side. In some places the pebble layer filters the water. At the edge of the plateau the limestone ends along the steep ridge, which has crumbled due to erosion, parts of it having broken off. These 'wandering stones' can often be found on the marly, clay surfaces of the hillsides. It is important not to forget the thermal springs, which played a vital part in the formation of the hill. Today these gush to the surface on the northern and southern sides of Castle Hill, at the foot of Gellért Hill and Rózsadomb.