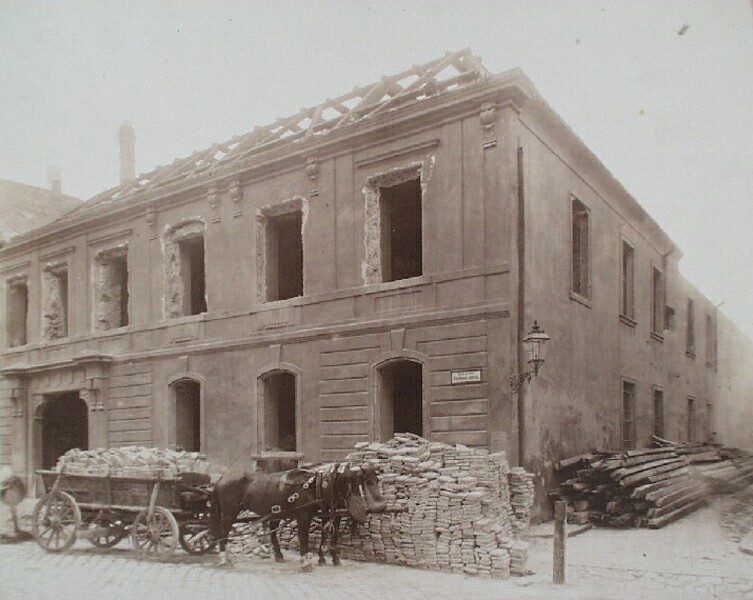 A two-storey stately building with an enclosed court built in Baroque Classical style. The three buildings that once stood on this site during the Middle Ages were damaged in the 1686 siege. At the beginning of the 18th century these houses were first owned by the chapter of Esztergom, before becoming the property of the university. When the government offices were moved to Buda in 1784 there was a sudden increase in the number of visitors whose needs had to be met. In response Buda town council decided to establish a hostelry and this was completed by October 1784. It became one of the most popular inns of the Castle quarter, and even King Joseph II himself spent a night there in November 1788.

In the 1850's some of its premises were converted into a school of design. From 1868 only the cafeteria on the ground floor remained in operation, while the upstairs was converted into an apartment and part of the ground floor was rented out by the University Press. Between 1872 and 1945 various state officials lived in it as tenants, and since 1966 it has housed the Hungarian Trade and Catering Museum.

It has a fifteen bays long Baroque Classical frontage. The three-centred arched gate gripped between pilaster strips opens at the left outermost axis, and the shape of the gate on the right was made in a similar way. In 1975 a brass tablet with an inscription and with a relief of a female figure was placed on its wall commemorating the history of the building. The museum's exhibition rooms are located in the vaulted premises at both sides of the gateway. Remains of Gothic sedilia were discovered in a barrel vaulted room right of the gateway.