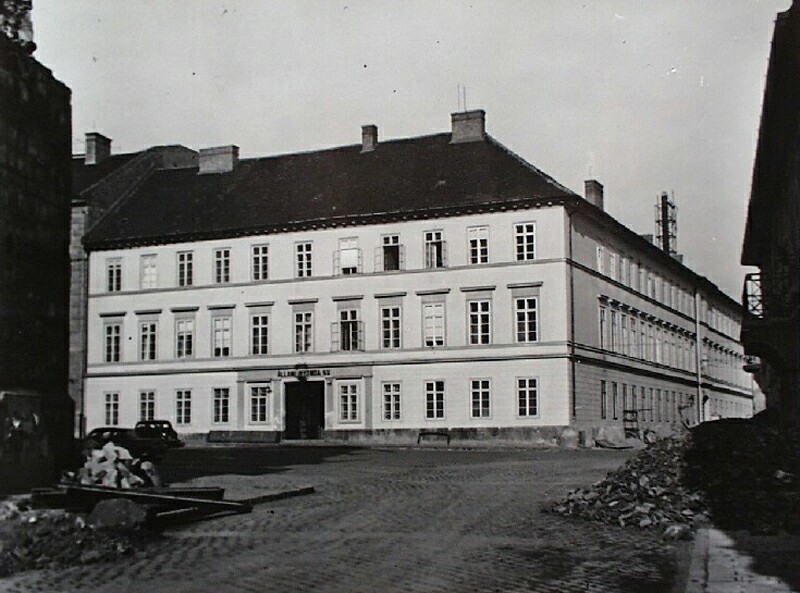 The thee-storey neo-Classical style building was erected in 1835 on an empty plot located within the area of fortification. In 1855 it was obtained by the Treasury. In 1876 the building was altered and expanded for the Royal State Press of Hungary which used to produce the printouts and stamps for the state administration and the army. The northern back wing of the building was constructed at this time and in 1890 was converted into a hall built of iron for the press. The original, neo-Classical courtyard was built in with mainly machine rooms in the 1930's. Damages resulted from World War II were repaired in 1949. The press operated here right until 1993, when the Buda Castle local government purchased the building for the City Hall. During rebuilding the industrial premises were demolished and the court was given a glass roof. The original paintings were restored in the ground floor area, and the building was decorated with ornaments and pictures.

The 11 bays long main-, and the 24 bays long side frontage of the building are crowned with a cornce with consoles. Above the ground floor level there is a string-course, while upstairs sills are running along. A low-relief illustrating the horror of the plague is placed in the gateway, while a scene illustrating the construction of the Holy Trinity Column can be found in the records office. Four neo-Classical statues are placed in the large aula: right to the entrance the artworks of Mihály Bauer: the "Public Safety" and the "Justice", while on the left the "Love" and "Honesty" made by Ferenc Uhrl. On the wall of the aula a couple of large paintings are placed: Béla Grünwald Iványi commemorates the founder of the Buda Castle with his work 'King Béla IV returns home" and Pál Vágó remembers the 1848-1849 revolution and freedom fight with "The capturing of Buda Castle" on May 21, 1849."

The wedding hall is decorated with the mosaic picture of three angels by Gyula Benczúr, while the representatives' chamber hall on the ground floor is decorated by two large Benczúr oil paintings: the "King Matthias welcomes the papal legate" made in 1915 and the "Victorious King Matthias marching in to Buda" made in 1919.