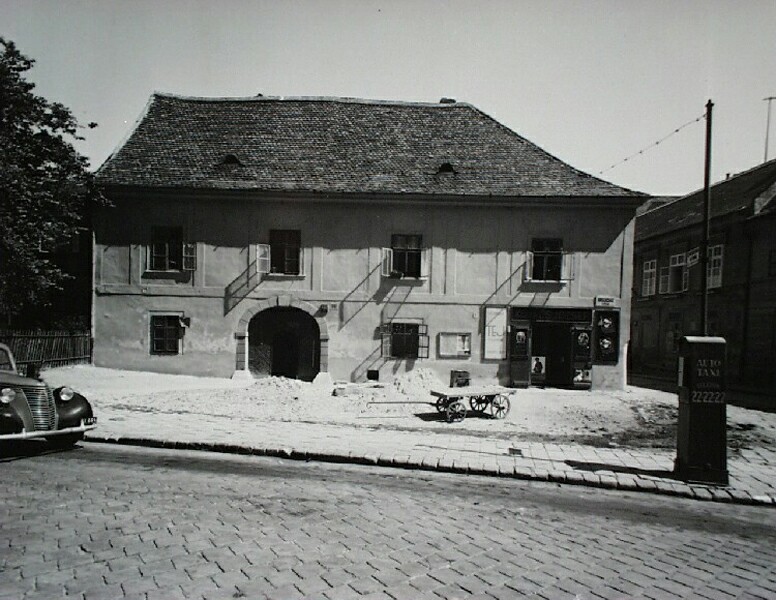 Two-storey Baroque corner house at the northern side of where Kard Street joins Országház Street. It was built at the beginning of the 18th century on the ruins of a building that collapsed during the 1686 siege, and has kept the same appearance ever since. Damage caused to the building during the war was repaired in 1948. Currently it functions as the guesthouse of the Hungarian Academy of Sciences.

Both the main and the Kard Street side facades are four bays long. The stone-framed, three-centred-arched gate opens in the axis located second left from the central axis. The frontage is of a simple appearance with a string-course in the middle, and a cornice on the top. The windows are simply framed. Remains of a late-medieval ashlar mural painting appeared on the facade of Kard Street, together with a secondarily walled-up Roman tombstone.

A statue commemorating one of the famous characters of the Hungarian history of theatre play stands outside the house. The inscription on the pedestal is as follows: "Márton Lendvay, an actor of the National Theatre 1807-1858". The statue, which looks back on an eventful history, was ordered in 1860 by Anasztáz Tomori, a supporter of the arts, and made by the sculptor László Dunaiszky. It was placed in its current location in 1971.