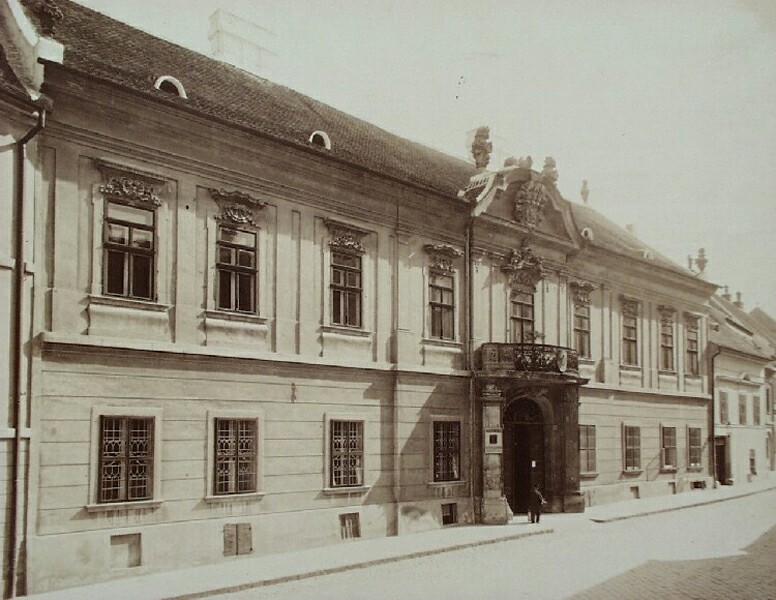 Baroque style, noble, stately mansion. According to layouts from the end of the Turkish era, at least three different properties with ruined buildings used to stand on this site. Based on archeological investgation it seems that in the 14th century this part of the land belonged to the neighboring building complex, which was the Kammerhof, or Magna Curia Regis - as it was also referred to. During the archaeological excavations carried out in the area, the base walls of a building with polygonal termination were unearthed, which was most probably part of the Saint Martin Chapel of the king's court from 1349.

In 1743 the land described above was obtained by Count György Erdody, president of the chamber, keeper of the crown (and from 1748 Lord Chief Justice), who - after demolishing the building previously standing here - ordered the construction of a representative mansion. The construction began in 1750 and the building remained in the same form without significant changes right until 1912, when Earl József Hatvany, the famous sugar factory owner, took over the property. He ordered the rebuilding of the mansion in 1913, as a result of which only the main front remained untouched. The building survived World War II in a relatively good condition, after which it functioned as a school. Between 1968 and 1976, under the leadership of Katalin H. Gyürki, archaeological excavations were performed in this area. Following the excavations, a modern lecture hall was established beneath the courtyard. Currently the Institute of Musicology of the Hungarian Academy of Sciences, the Museum of History of Music, the Bartók Archives and the Erno Dohnányi Archives operate within its walls.

The two-storey, nine bays long main front of the building is a beautiful example of Baroque architecture. There is a three bays projection in the middle, which further increases the strong emphasis of the ornamented gate placed in the middle axis. On both sides of the three-centred arched gate are two pillars with masques holding the second storey balcony, which has a parapet ornamented by a relief and a high-wrought railing. Above the lintel course of the balcony door, a couple of stone-carved putto figures and a vase can be seen. A curved pediment with the coat-of-arms of the Hatvany family is placed on the cornice. At the two edges of the pediment are two stone vases. The windows on the ground floor are simply framed, with an ornamented neo-Baroque latticework. The windows upstairs are a lot more detailed, with rich Baroque reliefes on the lintels, and different types of moulded lintel courses.