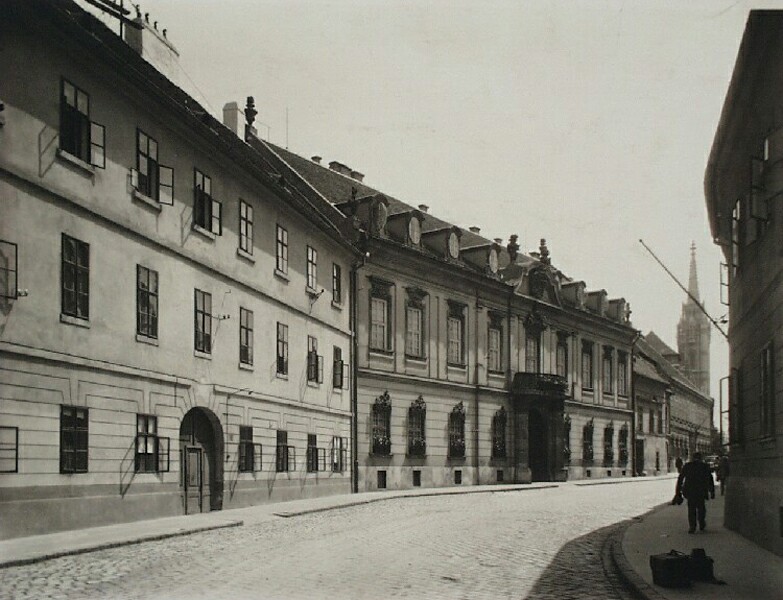 The two-storey block looking onto the street is of relatively late origin compared to other buildings standing on this plot, and its current form was constructed sometime between 1810 and 1833. The street side of the plot used to be an open space, with only a couple of buildings at both ends. These were most likely incorporated into the new building, which according to the Marek map was an army post. In 1887 a small court extension was attached to the building, which was referred to as the building of the Military Headquarters (Platz Commando Gebäude). Prior to World War I, the entire property belonged to the Ministry of Finance, and in 1948 was given to the American Embassy in war reparations.

The front of the nine bays long building with a gate in the middle axis does not represent any significant architectural value, although it nicely fits into its surrounding. On the first floor, a couple of marble tablets with brass portrait reliefs commemorate Lajos Kossuth and Mihály Táncsics who were imprisoned here. (The former is the artwork of Lajos Berán, the latter of János Istók).

The other building standing on the same plot looking onto the bastion, and which once served the purpose of a powder-magazine, is more interesting than the 19th century army post on the street section. It is one of the last examples of the military establishments erected at the beginning of the 18th century in the Castle district. The two-storey rectangle Baroque building which was given an annex on the south-eastern side, is deeply cut into the embankment of the courtyard. When constructing its northern end, the remains of the former medieval gatehouse were taken into consideration. In 1784 the castle's gunpowder magazines were moved outside of the town walls by Joseph II, but the buildings were in use again during the French wars. Once the army post was erected on the street section, it functioned as a prison. It was the jail for the so-called prisoners of state, and was used as such even after 1848-1849. Besides the aforementioned prisoners, Lajos Kossuth and Mihály Táncsics, several other great figures of Hungarian history were imprisoned here, such as Lajos Batthyány, Gergely Czuczor, György Károlyi and Miklós Wesselényi.