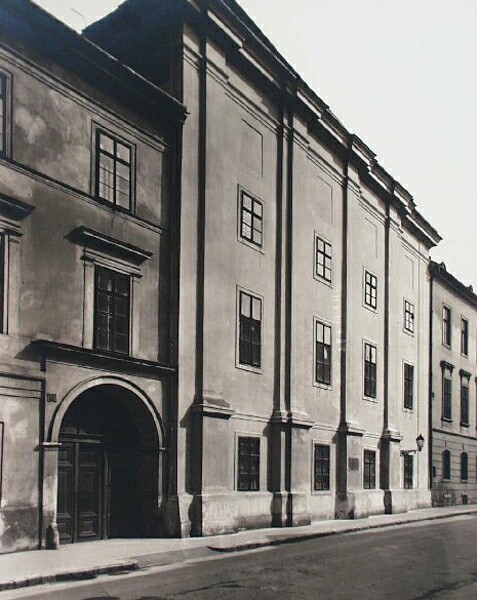 After the 1686 siege the plot between the Franciscan and Clarist convents were not built in and there was a street between them. However, at the beginning of the 19th century, in order to meet the increasing space requirement of the government offices working in the former convents, a new building was needed, and for this purpose this plot was chosen. The wing connecting the two former convents was built between 1823-1824 according to Mihály Pollack's plan in neo-Classical style. In 1872 the building was enlarged for the Home Office towards the Church of Mary Magdalene. This part was pulled down during the reconstruction after World War II. Today the building houses the Institute of History of the Hungarian Academy of Sciences. On the left side of the 14 bays long facade of the two-storey building is a 3 bays long projection with Ionic columns, on its right side there is a round arched gate with paneled doorwings. An entablature crowns the building and there is a string-course above the ground floor level, and there are sills upstairs.