The Palace at the Turn of the Century and Today 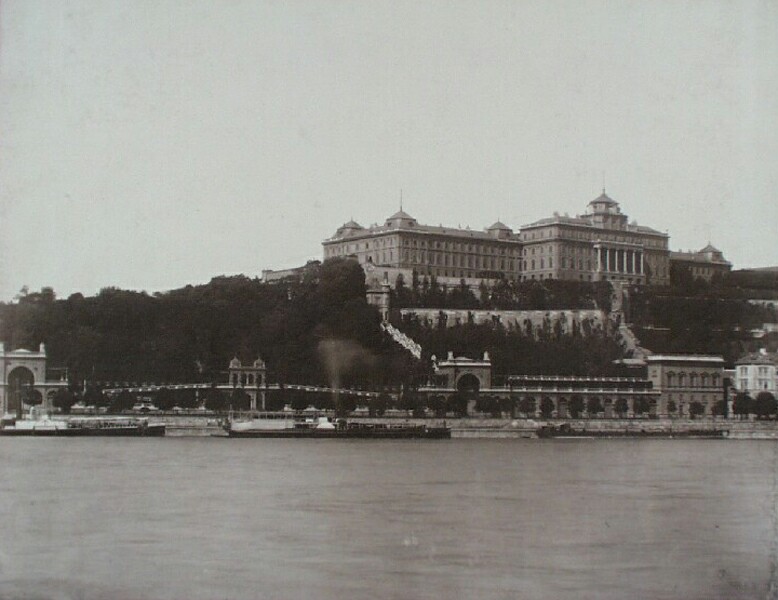 The planning and design regarding the expansion of the entire palace finally began in 1885, when the architect Miklós Ybl was again entrusted with its execution. The plans included the wide-scale extension of the palace complex both to the west and north. The actual construction commenced under the direction of Miklós Ybl in 1890 with preliminary work on the new wing (today: building "F") located opposite the middle wing of the Baroque Palace on the west. The enormous, newly designed building block required the construction of an extensive terrace-like foundation, which extended over the former medieval Western Ward. The preparatory work for the supporting brick wall, which with its decorative yet massive appearance is still a determining feature of the western side of the palace, was also begun around this time. This work had enlarged the surface of the terrace to be potentially used for further buildings. At the same time along the outer side of the wall a new road, the Palace Road, leading from west to the palace was also built. 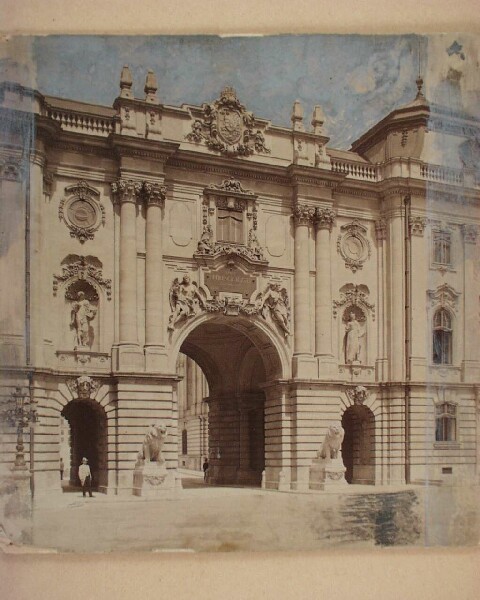 The new wing became the largest block of the entire complex. It is attached to the old northern and southern wing from the northeast and southeast. Together the Baroque wings and the new wing completely encircled the original Baroque Court. The newly established Lion Courtyard was named after the main gate opening to north, the inner and outer side of which was guarded by one-one pair of lion statues.

The bottom four floors of the newly erected building of seven levels were used for servicing establishments and for the staff. The residential areas and banquet halls were located on the fifth and sixth floors - which are the ground floor and first floor from the direction of the Lion Courtyard - while the seventh (second) floor was allocated to the staff, and was the secure vault for the coronation insignia. 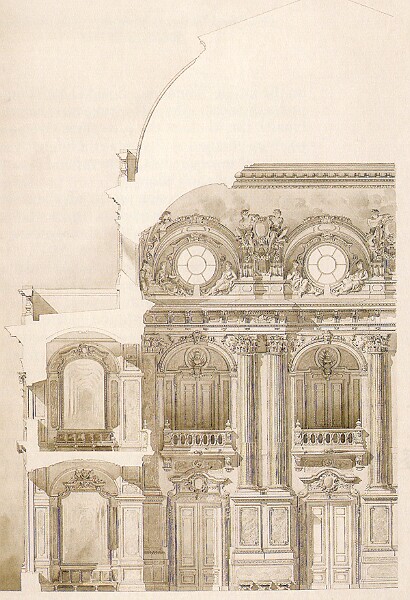 Fundamentally the new western wing served the purpose of a residential area, and was not used so much for royal ceremonial functions, which normally took place in the banquet- or throne-hall, situated in the opposite, Baroque main wing. However, during the course of various events it was realised that the banquet hall was too small, so Hauszmann further expanded it towards the court. Nevertheless it was still too small during the series of events of the millenary festival in 1896.

Further on only a northern extension, beyond the Baroque Palace, was feasible. As a first step, the building of the Baroque Arsenal, the Zeughaus, was demolished, which was followed by filling-up the open parts of the second Dry Moat. Two new wings were added to the previous building complex. The extension took place along the longitudinal axis of the Baroque Palace in a northerly direction and followed the principles of symmetry. Instead of the former three wings of the Baroque Palace, five now stood on the eastern side: they are buildings "A", "B"C, "D" and "E" today. As a result, a 304 metre long chain of buildings was constructed. The former northern wing (building "C") became the centre of the new façade on the Danube's side. An open grand staircase with two slightly curved flights, named as the Habsburg Staircase was built here in front of its eastern, main entrance. 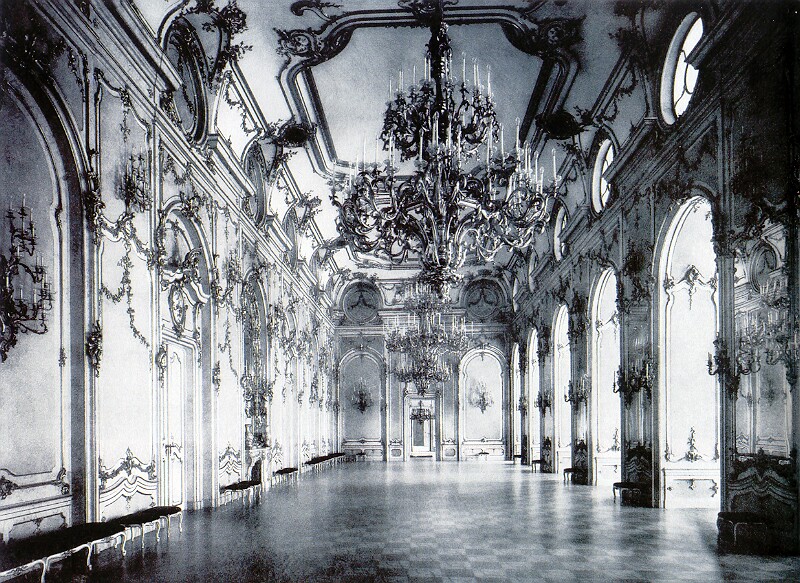 The entire eastern building complex served the purpose of the royal ceremonial functions, balls, banquets, receptions, audiences, etc. It consisted of a nearly 200 metres long concatenation of rooms and halls opening into each - other on the first floor. The new Northern wing ("Building "A") was given the role of the reception area with its main gate opening in the direction of Saint György Square, which is located north of the palace. The Entrance Vestibule was formed here in the eastern section. The new centre of royal ceremonies, the Great Ballroom was given place at the western side of the new wing located lower south (Building "B" ), while on the eastern part facing the Danube, the Buffet Hall was built. The ballroom with its impressive size (724 square metres, 15.5 metres height) was able to accommodate large-scale events from this point onwards. The former northern Baroque wing (Building "C"), - which became the main wing, - gave home to the smaller but similarly elegant premise, the Habsburg Hall. In the former Baroque main wing (Building "D") the Throne Room or Ceremonial Hall which was extended by Hauszmann, had preserved its previous function. 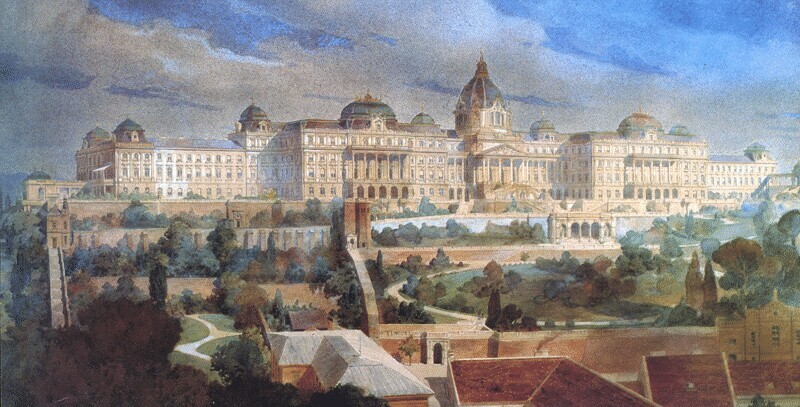 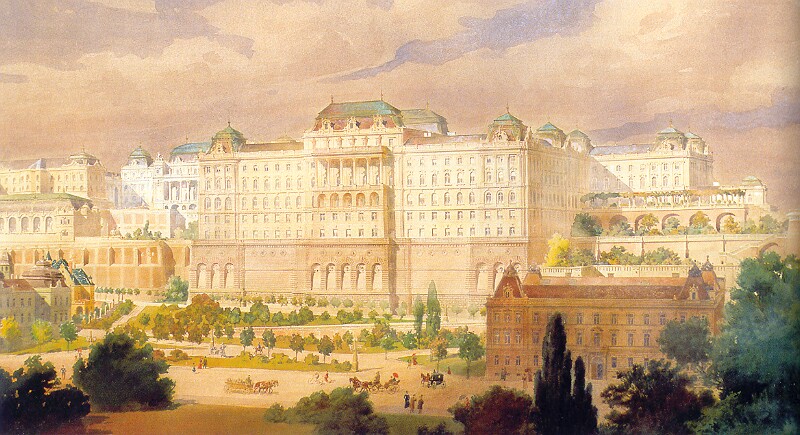 Ceremonial halls were also placed in the western wing during previous /re/-construction works. Since they were specifically designed for the royal private residence, they were naturally smaller. King Matthias' Hall as well as the Saint Stephen's Hall are worthy of particular note. 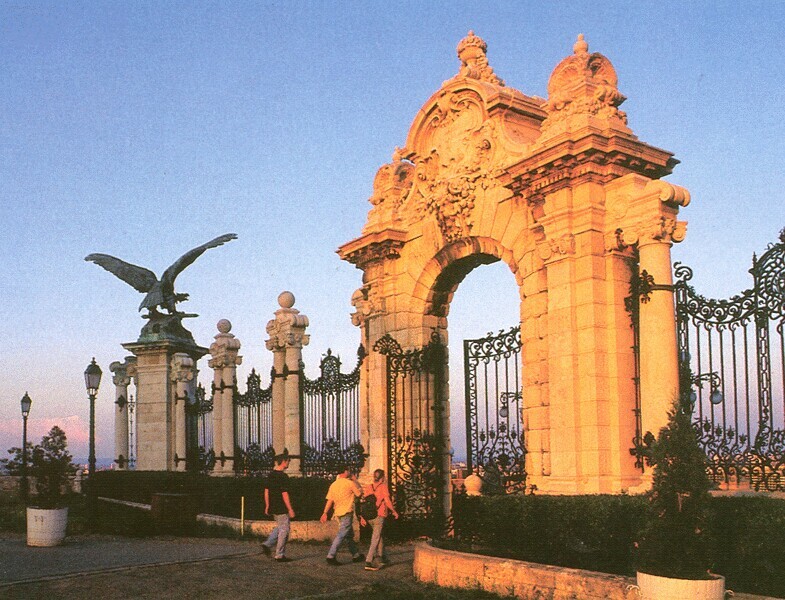 The extension and furnishing of the palace was completed by 1904. The renovation and extension work did not only effect the palace itself, but included all servicing buildings and gardens in the immediate surrounding of the palace. The vast stable and riding school set-up in the middle of the 19th century was given a new face in the manner of the historical architecture of the turn-of-the-century. Functions of the riding school were relocated in a new, impressive building at the Western Ward (or as newly named the Horse-Herder's Court). Finally, south of the old stable at the west end of the 2nd Dry Moat right in the forefront of the Lion Gate, a new guard post was erected in line with the fashion of the turn of the century.

The architectural development of the palace was completed with the above-described constructions and at the same time stopped for almost half of a century. However, this group of buildings - even if altered on several points - has remained a determining feature of the view of Budapest up to the present day. The palace, which was used by the last Habsburg ruler, Charles IV until October 1918, after the revolutions and counter-revolution became the residence of Miklós Horthy, governor of Hungary in 1920. He was removed from here by the German troops on October 16, 1944. 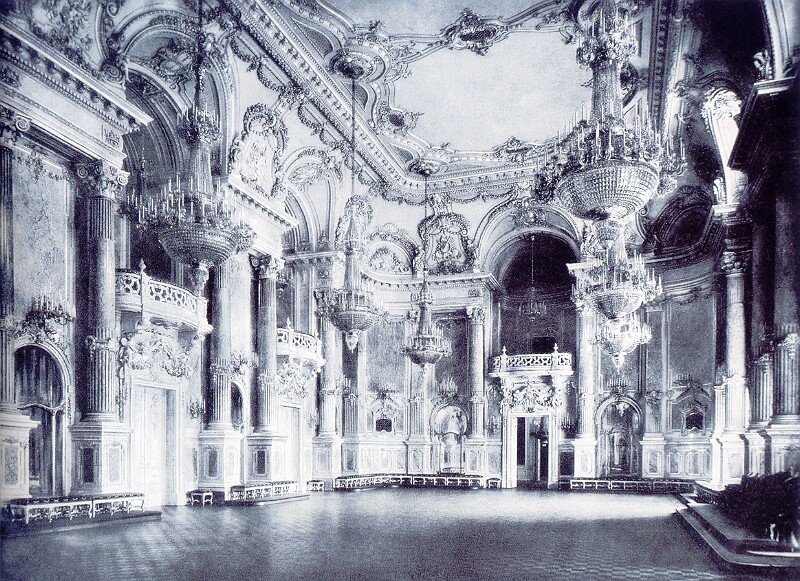 During the siege of Budapest from Christmas 1944 until February 11, 1945, the Buda Castle and within it the palace was used as the General Headquarters and the last stronghold of the German and Hungarian troops, and subsequently became the scene of terrible destruction. 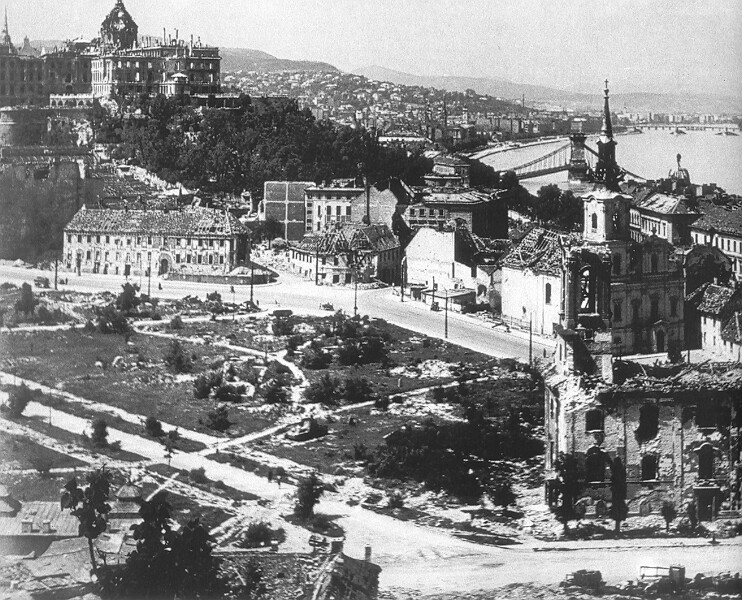 Under the direction of László Gerevich archeological investigation into the medieval history of the ruined palace began in 1948. As a result, the ruins of the medieval palace that had been buried for two centuries were coming to light step-by-step. The findings continuously contributed to the line-up of monuments to be displayed. Restoration works were directed by László Gero from the beginning.

Besides the preservation and archaeological work carried out on location the redesigning of the entire palace was also under way. According to the original plans the Communist Party Headquarters as well as State- and Administration Center would have been established here. However, in 1959 a favourable change was made to the plans when it was decided that the palace should house exclusively cultural institutions and public collections. According to this building "A" was given to the Museum of Modern History, buildings "B", "C" and "D" for the Hungarian National Gallery, building "E" for the Budapest History Museum and building "F" for the National Széchényi Library. 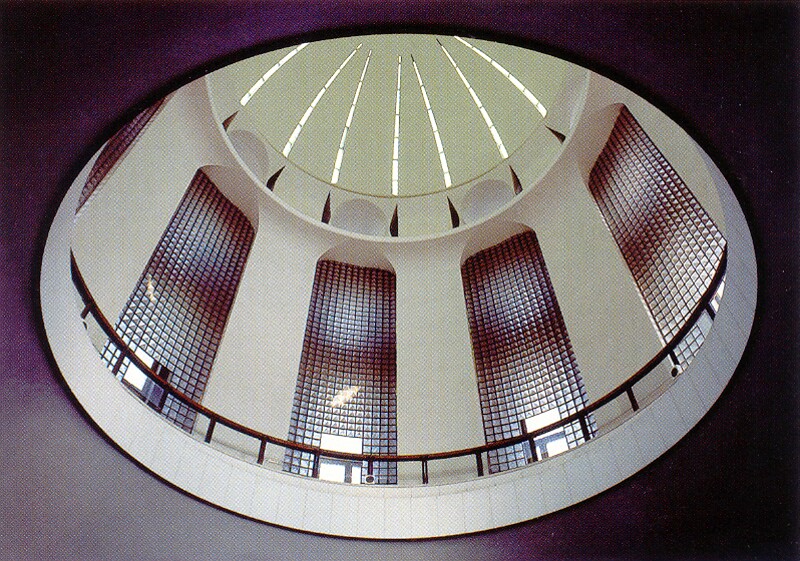 After the decision was made, however, more than a quarter of a century passed before the last institution was placed in its part of the building. First, the Budapest Historical Museum moved to building "E" in 1967. The Museum of the Working Class Movement (after 1990 replaced by the Ludwig Contemporary Museum of Art) was placed in building "A" only in 1974. The same time was the National Gallery moved to the buildings "B-C-D". Finally, the National Széchényi Library was relocated to building "F" in 1985.

With the exception of building "A", the reconstruction did not change the original ground-plan of the palace. In contrast to this, however, radical changes were made inside the palace wings. Instead of restoring and replacing the damaged or destroyed interior, it was completely modernised. Nothing was left from the interior of the former royal palace. All the service buildings outside the palace that were built during the 19th and 20th centuries, such as the royal stable, the new riding school and the guard post, were demolished. 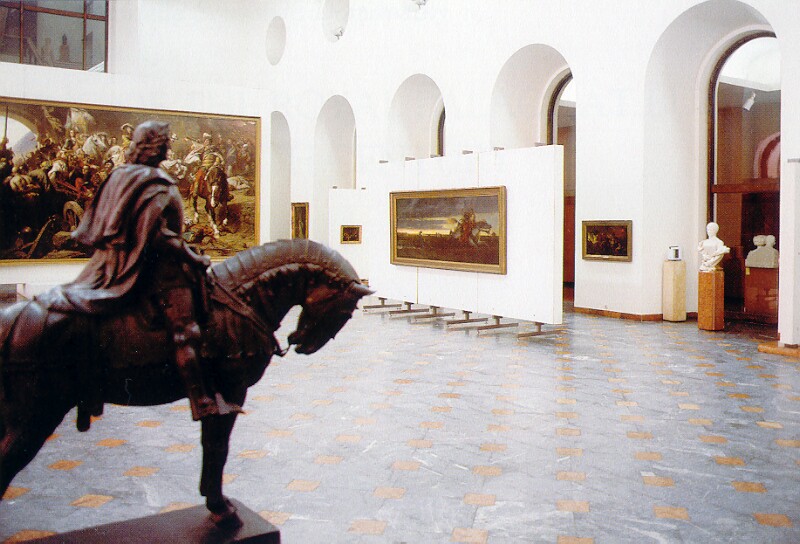