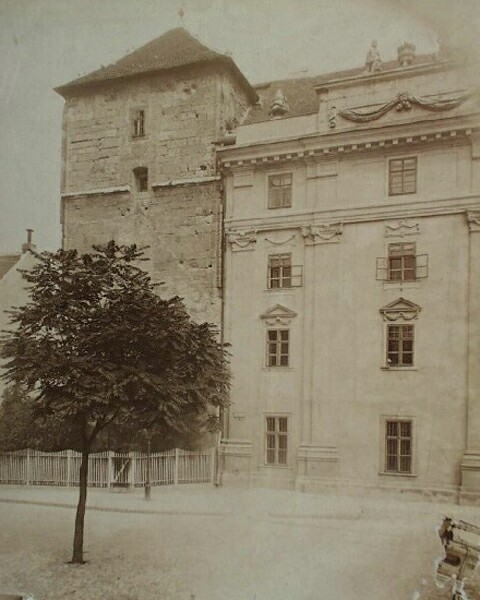 After a long process of development, at the beginning of the 20th century, the square finally gained its current expanded trapezoid plan. The area was most likely used as a square from the very beginning and was gradually expanded. Based on available sources it seems that the place was not given a separate name during the Middle Ages, instead, it was referred to as Saint Miklós Street which runs along the eastern side of the square. Houses that used to stand at the junction of the two streets were demolished during the Middle Ages and the northern square termination was formed. The Saint Miklós Monastery of the Dominicans was erected on the eastern side in the middle of the 13th century, after which a street was also named. Today out of the entire monastery complex only the remains of the church's 15th century tower named Saint Miklós or Miklós Tower still exist. Burghers' houses used to stand along the area south of the monastery's church, right to the Nagyboldogasszony (Matthias) Church.

Even though only in a reconstructed state, medieval houses that used to stand at the north-western part of the square survived and were integrated into the building under No. 4 Hess András Square. Buildings of the southwestern part were entirely demolished, conclusions regarding their existence can only be drawn from layouts dating from the end of the Turkish occupation era. According to these, originally a short lane used to lead from the corner of the irregular plan square to Országház (Parliament) Street. The southern street-like continuation of the Square was referred to as Ötvös(Silversmith) Street during the Middle Ages. 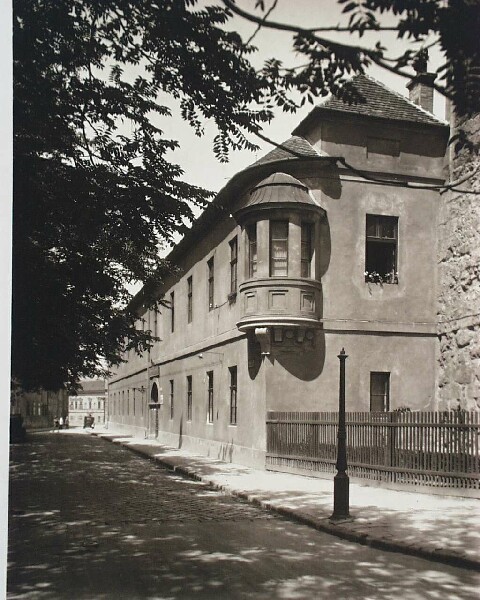 The square's plan did not change fundamentally during the Turkish era. The only new building that appeared on the layouts was a long building with a rectangular ground plan, which must have been a trading hall on the Hüszrev pasha market, which was presumably named after Hüszrev pasha djamir. The monastery's building was used as an arsenal and as a stable.

The Baroque era introduced several new changes for the square. The Nagyboldogasszony (Matthias) Church on the southern side was donated to the Jesuit Order in 1687. As a result, the wall-to-wall building in of the area between the church and the Dominican Monastery was made possible. The huge building of the Jesuit dormitory was erected here between 1688 and 1702 and was fully completed by 1747. The Jesuits used it only until 1773 when the order was dispersed. 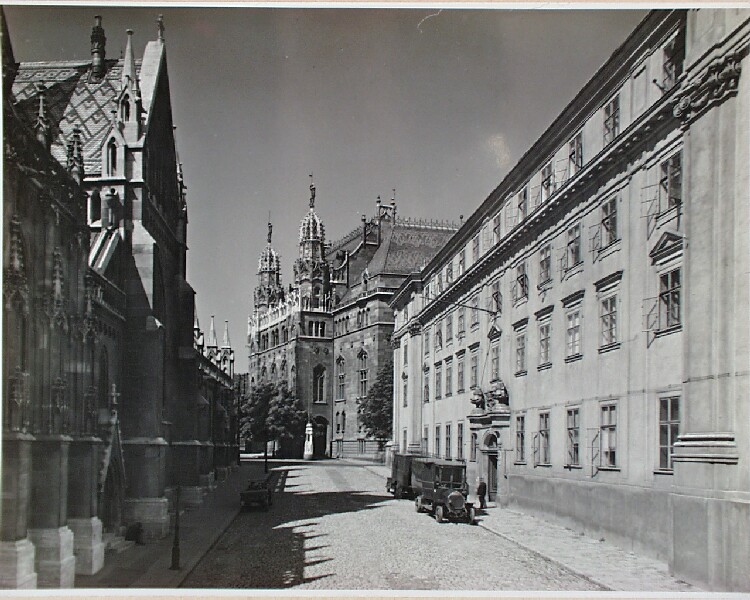 Following the reoccupation of the Castle from the Turks in 1686, an army bakery and food depot was constructed at the northeastern side of the square replacing the Dominican Monastery, which continued to function until 1784. After this these buildings were turned into a school and between 1902 and 1936 a boarding school for girls. At the other side of the square a new Baroque-style building was erected over the ruins of three medieval houses, (today: 4 Hess András Square.) which was first used as a warehouse for building material, later as a military hospital, and finally in 1784 it was given to the University of Nagyszombat which moved to Buda. Being influenced by the new buildings, the name of the square also changed from time to time: it was occasionally referred to as College and Schoolhouse or Workshop and School Square. 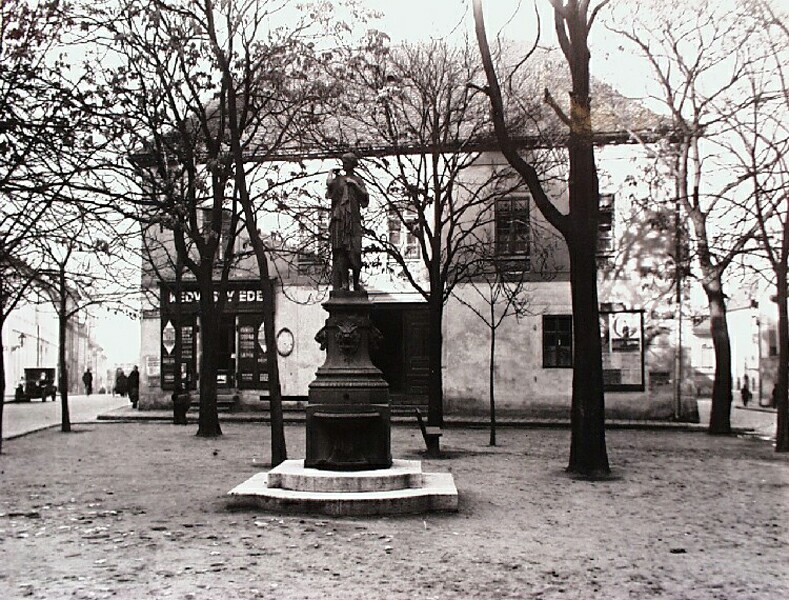 At the northern side of the square a privately owned building with free access to the public (No. 3 Hess András Square) was referred to as the "Inn for the Red Hedgehog" as early as 1696. When in 1776 and 1777 the water conduit that used to supply the Castle Quarter was lead here from Szentháromság Square, an important new element i.e. a public fountain appeared at the southwestern side of the square.

The building of the Jesuit boarding school (No. 1 Hess András Square) underwent several alterations. After the dissolution of the order it was turned into a general seminary (seminarium generale), but this institution only operated here until 1783. In 1784 it was given to the Royal Chamber and its features were re-designed in Baroque Classical style, which still determine the appearance of the building today. After 1849 first the Imperial and Royal Finance Management, then after 1867 the Ministry of Finance moved into the building and was located here right until 1945. In 1885 during the renovation of Matthias Church its wing attached to the church was pulled down and replaced by a new northern wing.

The building of the Academy opposite No. 1 Hess András Square was first used by the university, then from 1786 by the Council of the governor-general. It's Baroque Classical alteration took place during this time, and at the beginning of the 19th century a neo-Classical extension was erected at its western side. Between 1867 and 1901 the building belonged to the Ministry of Finance and then was demolished together with the neighboring block. The new neo-Gothic building of the Ministry of Finance spreading out over several streets was constructed partly on the site. The building (today No. 5 Hess András Square) is situated more to the west than the previous one, thus the southern part of he square - which was registered as Pázmány Street between 1879 and 1936 - became broader. By this the still existing layout of the area had been more or less formed. 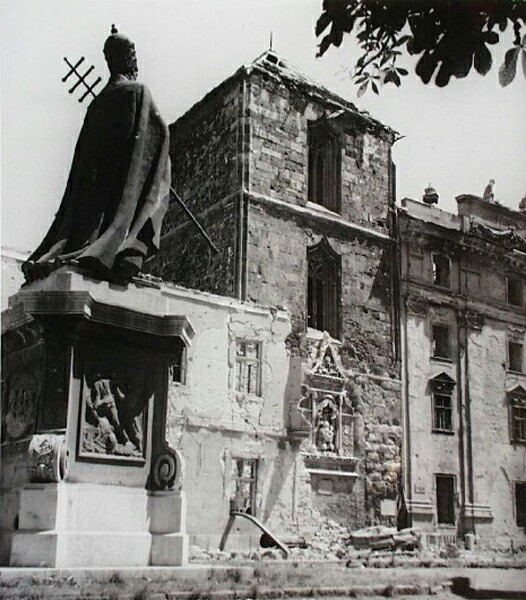 A minor change took place at the northwestern side of the square, at No. 4 Hess András Square. The University Press used to operate in this building between 1777 and 1926. It luckily escaped the demolition wave prior to the erection of the new Ministry of Finance, and the new building complex enclosed the old block.

The so-called Hébe Fountain was inaugurated in the square in 1923 and removed on the 250th anniversary of the liberation of Buda when it was replaced by the statue of Pope Innocent XI. The square then was given the new name Pope Innocent XI Square until 1945, when it was renamed after the first typographer András Hess. According to certain historical data it can be assumed that the medieval press used to operate in one of the northwestern buildings of the square.

During the siege of World War II the buildings of the eastern side were especially badly damaged: the school under No. 2 Hess András Square had to be demolished. In the 1960's extensive archaeological excavations began on the ruins, during which the remains of the medieval Dominican monastery and houses on its left were unearthed. By the end of 1976 the modern building of the Hilton Hotel was constructed while medieval and other remains were taken into consideration.