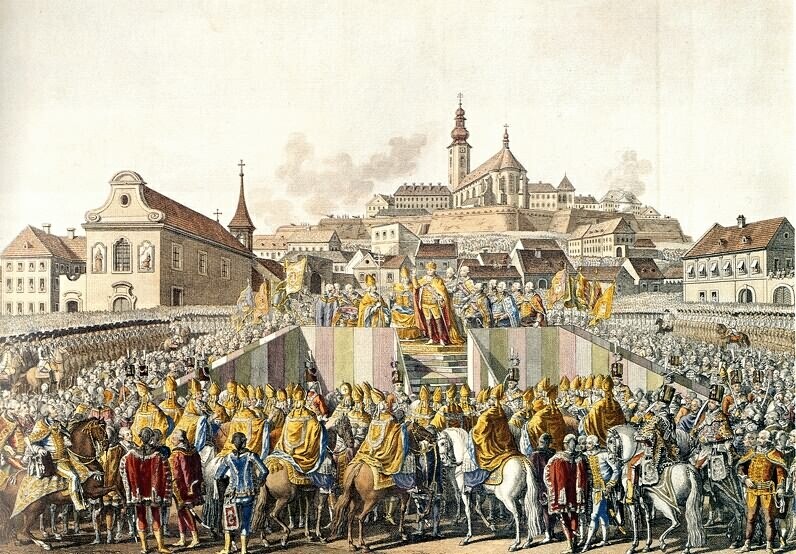 In modern times Buda was the venue for three coronations: in 1792 Francis I, in 1867 Francis Joseph and in 1916 Charles IV were crowned in the Castle. These celebrations were performed according to a strictly determined ritual, certain parts of which, however, could vary depending on the circumstances (the king's personal wishes, or the political situation), and certain scenes could also be changed.

The coronation of Francis I was set for the 6th of June 1792. The series of celebrations, however, had started four days prior to the king and his escort's participation. The ruler, at the head of a long procession of carriages entered the castle through the Bécsi kapu after the symbolic reception of the keys of the town. The young king and his wife were greeted by the council's respect, and a triumphal arch, music, a religious service, and in the evening ornamental floodlights were also part of the celebrations. 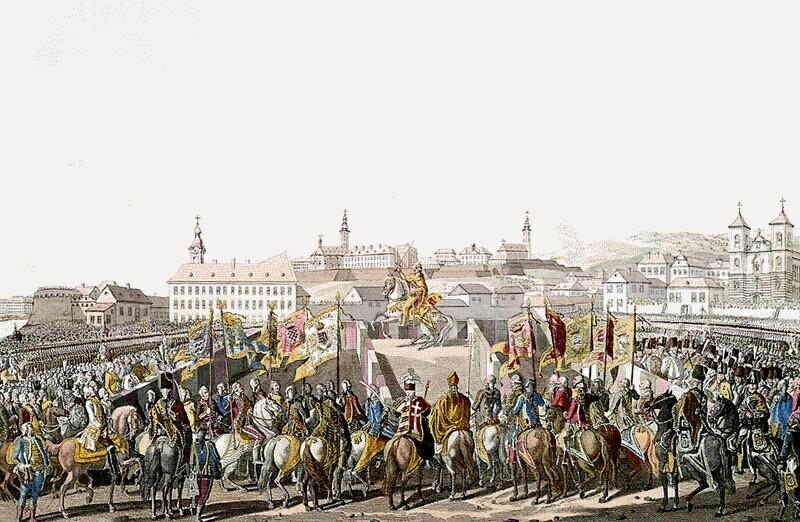 The dignitaries of the Hungarian estates gathered for the coronation in the Church of Mary Magdalene. According to tradition the Primate of Hungary, the Archbishop of Esztergom, József Batthyány led the ceremony with the assistance of the palatine, Alexander Leopold (who was the brother of the king). After the ceremony the king and his escort walked to the Matthias Church, where the king initiated soldiers ('vitéz') into the Order of Golden Spur. Heading the procession the master of chamber threw gold and silver coins, which had been minted in memory of the coronation, to the huge crowd. After these ceremonies the king rode to Víziváros to take the coronation oath on the platform in front of the church of the Capuchins and to perform the symbolic sword cuts towards the four cardinal points on the coronation hill set up near today's Margaret Bridge: these symbolised the fact that he would protect his country from its enemies. 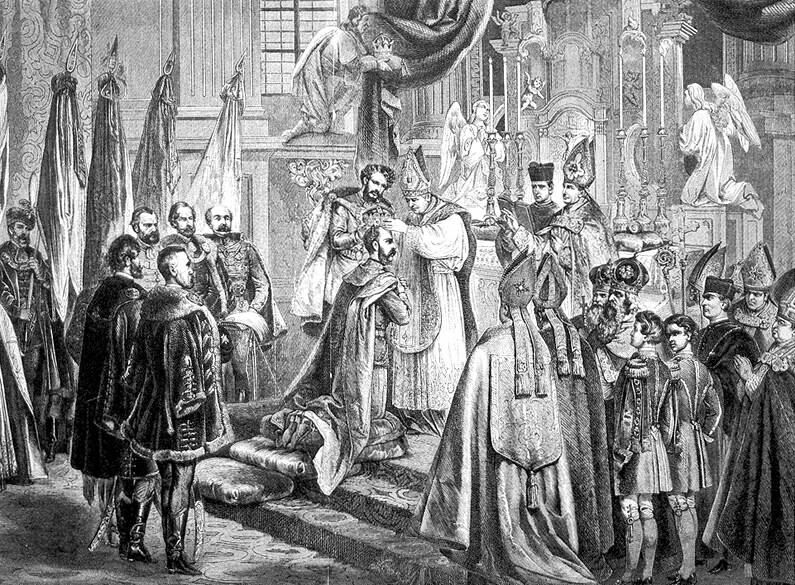 On the 8th of June 1867 Francis Joseph was crowned in Buda and Pest according to traditions and in the course of an especially spectacular celebration. There was a desire to celebrate the reconciliation of the nation and the ruler with great pomp (Francis Joseph had already been the ruler from 1848, i.e. for two decades before the coronation.)

The celebrations lasted for a week, and commenced with the arrival of the royal couple. The scene of the preparations, i.e. symbolic acts between the ruler and the parliament - the exchange of documents, the invitation for the coronation -, was the throne room of the royal palace. The interior of Matthias Church was decorated with carpets, upholsters and flags, and a splendid throne was placed there. On the day of the coronation the political and religious elite of Hungary marched in the procession, which started from the palace. The king covered this short distance on horseback wearing the uniform of a Hungarian general. On both sides the dignitaries of Pest and Buda escorted him.

It was the Archbishop of Esztergom again, who performed the coronation ceremony in Matthias Church. At the most important point of the ceremony, the placing of the Holy Crown on the king's head, the Prime Minister, Count Gyula Andrássy, assisted the archbishop. After listening to Ferenc Liszt's Coronation Mass - written for this special occasion - the king walked to the garrison church, the Church of Mary Magdalene on a path covered with the cloth of the Hungarian Tricolour, to initiate soldiers ('vitéz') into the Order of Golden Spur while the mounted chancellor of the exchequer threw memorial coins to the crowd. 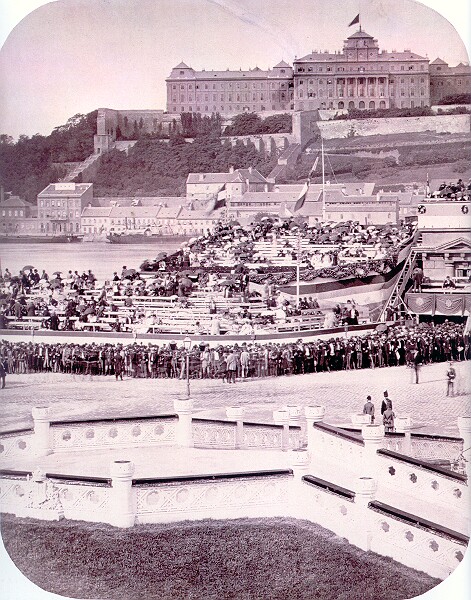 After that the king and his escort proceeded on horseback along the Chain Bridge (Lánchíd) to the central church of Pest. On the platform of the church he took the king's oath in front of the members of Parliament. On Coronation Hill erected in front of the foot of Chain Bridge, in Pest Francis Joseph performed the four sword cuts on horseback. He sealed the great reconciliation by giving the 100,000 gold pieces, which he had received as a coronation present from Parliament, to disabled soldiers who had been injured in 1848-1849 and by declaring full amnesty for political prisoners. 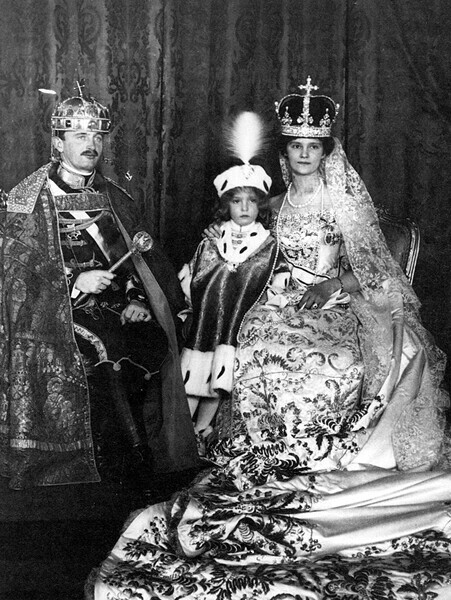 Francis Joseph's successor, the last Hungarian king, Charles IV was crowned on 30th of December 1916. As World War I was raging at the time the ceremony was not as pompous as in 1867, and it was limited to the area of the Castle for security reasons.

To the resounding sound of cannon fire and the ringing of bells the coronation procession marched from the royal palace to Matthias Church. The young king and his wife covered this short distance in a Rococo coach driven by eight white horses. The Archbishop of Esztergom again performed the ceremony, and was assisted by the Prime Minister, Count István Tisza. This time the new king initiated soldiers into the Order of Golden Spur at the very scene of the coronation, in Matthias Church. This otherwise protocol-like action was made rather dramatic by the presence of assembled disabled soldiers, some of whom were amputees, victims of the ongoing horrific war...

King Charles IV took the coronation oath on the platform erected in front of the church, next to the Szentháromság Statue (Holy Trinity Statue), after which he proceeded to Szent György tér on horseback to perform the traditional sword cuts on the hill.