Soldiers and other Armed Men 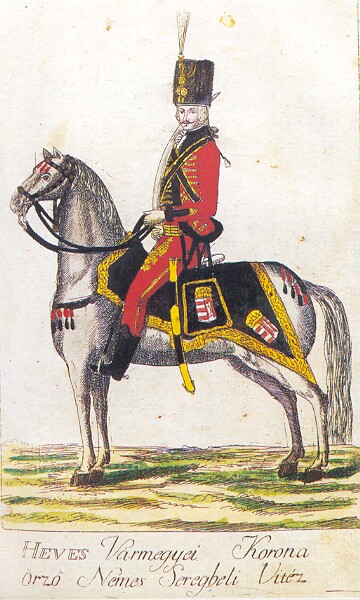 After the Turkish occupation Buda was not exposed to any further threats until 1848. The castle, however, preserved its features of being a fortress during this long period of peace. This was officially brought to an end only in 1874. With the development of artillery the castle, surrounded by higher hills, lost its strategic importance, but because of the institutions located there it had a military character even in the 19th century. The Ferdinand barracks stood in today's Kapisztrán tér, and the József barracks stood in today's Táncsics utca. The military establishments were principally concentrated in Szent György tér. The Hungarian High Command operated in the former Carmelite convent, the building of the Main Guards looked onto Dísz tér, and there were two barracks in the place of Sándor Palace, which was built in 1806. To the south of this - in the place of today's northern wing of the palace - was the huge building of the storehouse of weapons (Zeughaus). On the western edge of the square stood the army post of artillerymen and the cannon arsenal, the cannons of which - fortunately - had only been used for ceremonial salutations for 150 years.

The guards standing in front of military objects, the changing of the guards, the troops marching out and the performance of the army bands at celebrations and balls - in the 18th and 19th century - were all part of everyday life in the Castle. The officers, who were stationed here for longer periods of time, were welcome members of the high society, and many of them settled in Buda when they retired. 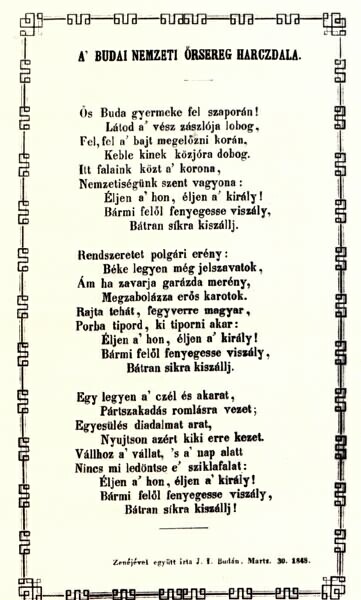 Sometimes, however, not only soldiers but also civilians could be seen in uniform with weapons in their hands. As it was usual in modern towns, the shooting society was one of the oldest organisations in Buda. In cases of emergency citizens had to take part personally in the defence of the town and target shooting prepared men for this. The Civil Shooting Society of Buda, which constituted the basis of the town's self defence, was formed in 1696, at the time of the reorganisation of the local government.

Being a member of the shooting society was a social position and the aristocrats living in the castle often visited the shooting field. Shooting competitions were considered as social events. Besides the army the shooters also marched out with their own band and stood in ceremonial lines on the occasions of big religious celebrations and visits of the ruler.

When in 1789, during the last Turkish war, the army stationed in Pest-Buda left for the battlefield in the south, the militia was reorganised from the members of the shooting society. The "guard troop" soon needed their own uniforms. In 1790 when the Holy Crown was brought to Buda nine uniformed companies marched in the celebration. In the years of the long French wars the task of this guard troop was not only to take part in parades but also to fulfil the public security duties of the garrison. 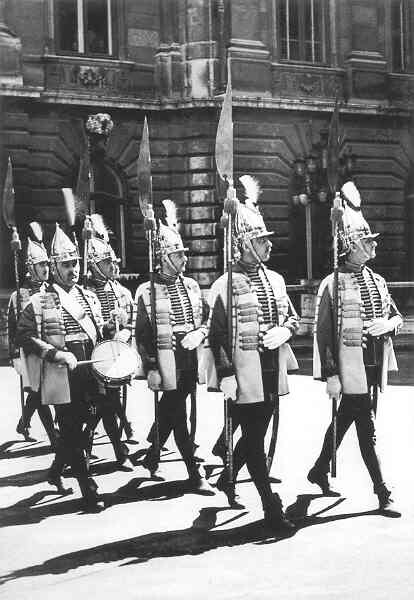 Besides the regular army stationed in the castle and the armed bodies of civilians, special armed corporations also operated in the castle for some time. Out of these various bodies the Crown Guard existed for the longest period of time, from 1790 to 1944. It was formed on the occasion of the moving of the Holy Crown, the most important symbol of the state, to Buda. Their presence lasted till the autumn of 1944 - intermittently. One of their duties was to guard the emblems of the state in the grenadiers' uniform (in bearskin hats, white tailcoats and light blue, tight Hungarian trousers.)

Between the two world wars, in the time of the "kingless kingdom" the guards of the government, or in their official name the Royal Hungarian Guards, provided security and performed ceremonial functions in the residence of the head of the state Miklós Horthy, befitting the prestige of the building. Armed guards watched over the royal governor and his family and offices, while representation was the task of the halberdier troop. On holidays the military band accompanied the ceremonial changing of the guard and this was a spectacle for tourists.

The guarding of the palace and the governor became really important at the end of World War II, in 1944. On the 19th of March 1944, during the country's occupation, the reinforced guards prevented German troops from taking over the Palace. On the 15th of October, after Horthy's unsuccessful attempt to pull out of the war, the guards fought a small battle with the occupying armed German troops and Hungarian Nazi groups.